Wacky Races Wiki
Register
Don't have an account?
Sign In
Advertisement
in: Characters, Original series, The Perils of Penelope Pitstop,
and 3 more

View source
watch 01:36
We're Getting Mutants in the MCU - The Loop
Do you like this video?
Play Sound

Penelope "Penny" Pitstop is a character in Wacky Races and The Perils of Penelope Pitstop. She was originally voiced by Janet Waldo.

She is the only female racer in the Wacky Races lineup (not that she minds), driving a pink feminine car known as The Compact Pussycat which has personal grooming facilities that would sometimes backfire on other racers, such as shampoo foam hitting their faces. She always has time to relax and worry about her looks, because her car is like a beauty parlor. Penelope Pitstop also has a habit of holding her arm out in the breeze to dry newly applied nail polish, which the others mistake for a turn signal (this habit once sent the Roaring Plenty into a cactus).

Peter Perfect had a crush on her, a feeling that was returned, and always tried to help her; in "Dash to Delaware", they almost end up married. She later has two children by him, Parker and Piper Perfect. She also has a sister, Pandora Pitstop.

Unlike other drivers, Penelope rarely was targeted by the other racers (except Dick Dastardly of course), as it seems they also liked and tried to help her as Peter did. Penny was always thankful for their assistance and was perhaps the most peaceful racer on the track, though she twice gave the Creepy Coupe's dragon and serpent a good bashing with her umbrella. In the 2017 version, she eventually shows martial arts skills.

Penelope also had her own cartoon series, The Perils of Penelope Pitstop, which also featured her rescuers the Ant Hill Mob. Her sworn enemy is the Hooded Claw, (who is unknown to her, her own guardian, Sylvester Sneekly). She wore a slight alteration to her Races wardrobe.

Penelope is an attractive southern belle. Although she is blind to the fact her guardian is her arch nemesis in disguise, she is very smart and often manages to get herself out of trouble before her true guardians the Ant Hill Mob can get to her in time.

In Wacky Races, Penelope has long blond hair in a full fringe. She wears a purple racer helmet with goggles. She also wears a dark pink rider jacket with a purple turtleneck and purple gloves, pink skirt with red pants underneath and white boots. In The Perils of Penelope Pitstop, Penelope's eyes resemble those of Daphne Blake, and despite having white sclerae, she wears red lipstick. Her helmet is replaced by a magenta pilot helmet with matching white goggles. She now wears a hot pink long-sleeved jacket with a matching belt and long magenta scarf, which is hanging loose on the right side. Even though she still wears her red pants and white boots from Wacky Races, her gloves are now white.

Penelope Pitstop, captured by her nemesis, the Hooded Claw

Penelope, nail filing herself out of danger 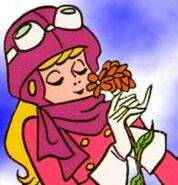 Penelope in her Perils outfit

Penelope Pitstop The Cowgirl with a Black Screen

Penelope Pitstop Ready for The Duel

Community content is available under CC-BY-SA unless otherwise noted.
Advertisement